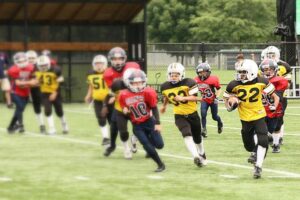 North Surrey football has teams at all levels of minor football.

These start at the flag level (ages 6-7) where the kids play a five-man, non-contact ball.

Next is Atom (ages 8-9) where the kids play a modified flag version of football with protective football equipment and FLAGS on the hips. Blocking will be allowed at the line of scrimmage. There is no tackling, instead, the ball carrier whose flag is removed by defensive player will be considered tackled.