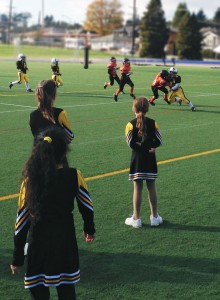 The cheerleaders practice around the club house fields Tuesday and Thursday nights with some squads practicing on Saturdays as well. Later in the year when the nights get dark the cheerleaders go indoors to local schools to practice their routines. 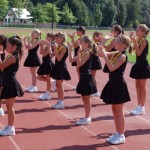 During the football season all cheerleaders participate on game day for their respective teams usually at home but sometimes this can be an away game. As well when football teams make the playoffs the associated cheer squad will follow their team including final playoff games at BC Place stadium.

Near the end of the season there is also the annual year end cheerleading competition. Through out the season the squads practice their routines and “pair” performances for this big event. Any questions please contact us. 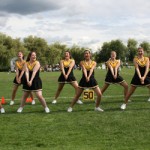 Each weekend there will be usually a local football game that each squad will be assigned to for the purpose of cheering on and getting the crowd involved. On some occasions there may not be a home game available to cheer for so the cheer squad will go to the nearest away field.

On top of following the action on the field and entertaining the home crowds the cheerleader parents will also run the candy table. During Bronze Boot the cheer squads will also sell 50/50 tickets throughout the weekend. 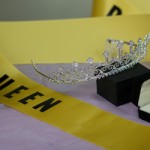 The annual competition is held near the end of the season each year at a high school in the lower mainland. Each association has the opportunity to enter all their squads as well as sets of “pairs” for performances.

In order to participate the cheerleaders must have participated in weekend game day cheerleading as well as be in good standing with the team.